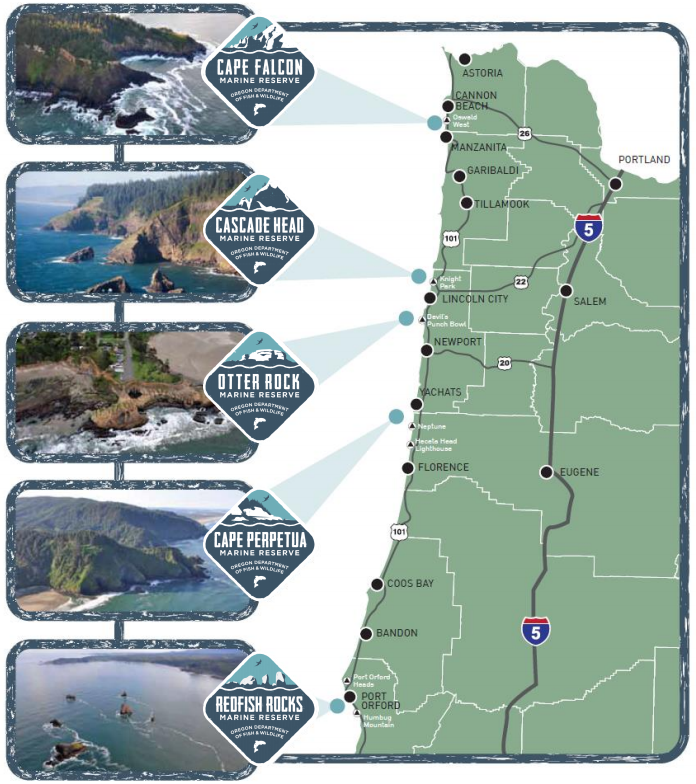 Oregon’s marine reserves are areas within our coastal nearshore waters dedicated to conservation and scientific research.

In 2008, the State of Oregon began to consider the establishment of a system of fewer than ten marine reserves along its coast as part of a continuing effort to move towards managing its marine waters and submerged lands using an ecosystem-based approach. The overall purpose of marine reserves is to provide an additional tool to help protect, sustain, or restore the nearshore marine ecosystem, its habitats, and species for the values they represent to present and future generations. Such action complements the collective efforts of Oregon, Washington, and California to manage the California Current in an ecosystem-based manner as expressed in the West Coast Governors’ Agreement on Ocean Health (Gregoire, Kulongoski, and Schwarzenegger, 2007).

A marine reserve is an area within Oregon's Territorial Sea or adjacent rocky intertidal area that is protected from all extractive activities, including the removal or disturbance of living and non-living marine resources, except as necessary for monitoring or research to evaluate reserve condition, effectiveness, or impact of stressors (OPAC Policy Recommendations Document, 2008).

Oregon has currently designated 5 Sites as marine reserves.  The Cape Falcon, Cascade Head, Otter Rock, Cape Perpetua, and Redfish Rocks marine reserves are each named for local natural landmarks. Within the marine reserves all removal of marine life is prohibited, as is ocean development.

The Oregon Department of Fish and Wildlife (ODFW) manages and scientifically monitors these five sites.  They are taking a deeper dive into Oregon's marine reserves to gain a better understanding of marine reserve protections, our nearshore waters, and coastal communities. The ODFW Marine Reserves Program is located at the coast in Newport, Oregon with six full-time staff.

A system is a collection of individual sites that are representative of marine habitats and that are ecologically significant when taken as a whole.  This goal is consistent with the larger ocean resources policy goal, Statewide Land Use Planning Goal 19.

The OPAC further recommended specific objectives for a Marine Reserve system in Oregon, which included:

The Oregon Marine Reserve planning process ultimately resulted in 2013 in the selection of five locations to be designated as Marine Reserves.

A full timeline of the Marine Reserves process may be found via the timeline section of this site at the top of this page. The State also initiated a comprehensive 10-year plan of management and study to evaluate the effectiveness of the new Marine Reserve system toward achieving the original goals and objectives of the State. More information on long-term monitoring of the Oregon Marine Reserves may be found at http://oregonmarinereserves.com/.