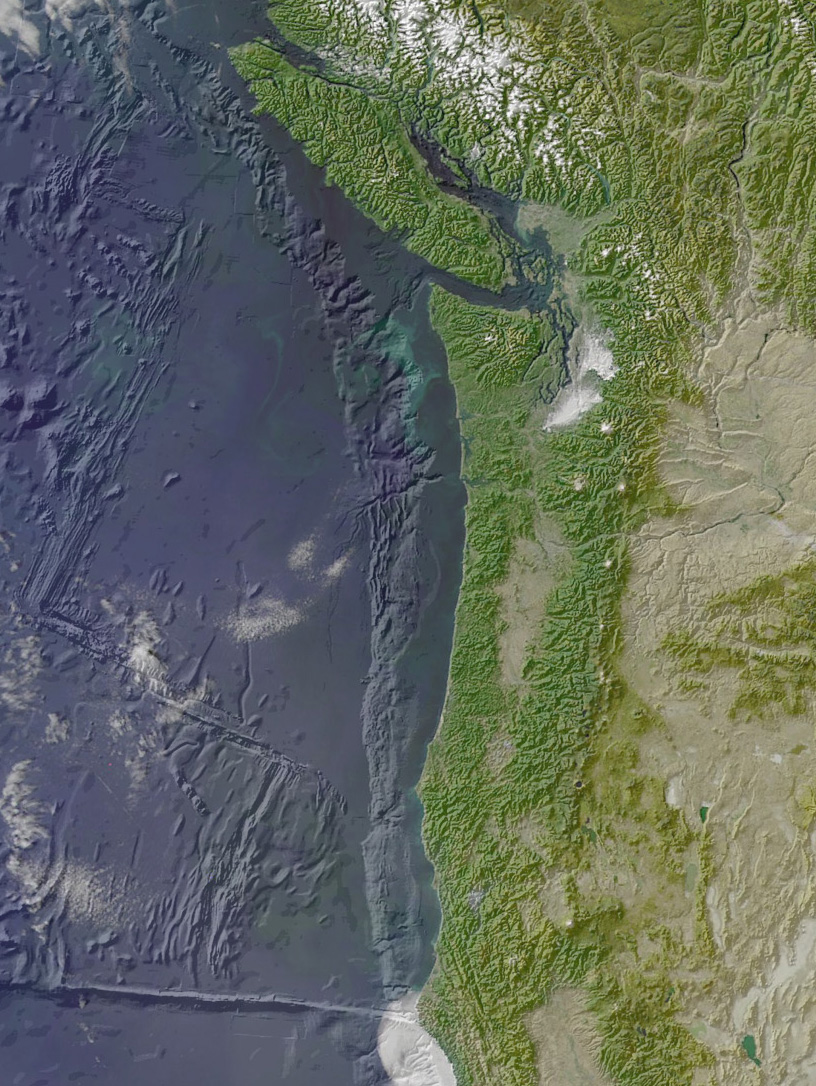 Strong public interest has a long history of shaping ocean planning and management in Oregon. This public influence has impacted the use and protection of coastal and ocean resources.

Today, Oregonians share concerns about the future health of the marine environment and its ecosystems. The Oregon Ocean Resources Management Program provides the state with a means to address these concerns in an open, informed, and comprehensive way.

This page introduces Oregon's Ocean Resources Management Program which has many parts. In addition to laws, policies, and activities contained in the program, this site describes the physical setting for the Ocean Program and provides links to a wide variety of interesting and informative sites in government agencies and academia.

Oregon's ocean area stretches approximately 360 miles from the mouth of the Columbia River to the California border and extends some 14 to 40 miles offshore. This area is part of and influenced by oceanographic and atmospheric forces that affect the entire Pacific Ocean. Because the natural setting of the Oregon Coast and ocean determine the ecological conditions and human uses of resources, effective policy and management requires an understanding of the setting and forces that affect this dynamic environment.

The roots of Oregon's Ocean Resources Management Program reach back to the early 1970s when concerns were raised over effects from potential drilling for oil and gas in federal waters and foreign fishing fleets working to within three miles of shore.

The Oregon Coastal Conservation and Development Commission (OCC&DC), created by the 1971 legislature, first addressed ocean concerns in the context of an overall plan for the Oregon coast. The work of the OCC&DC became the foundation for the coastal planning goals under the 1973 statewide planning law that created the Land Conservation and Development Commission.

In 1977, OCC&DC's ocean resource work became part of Oregon's comprehensive planning program when Statewide Planning Goal 19: Ocean Resources, was adopted by the Land Conservation and Development Commission as one of four coastal goals. The other three are Goal 16: Estuarine Resources, Goal 17:Coastal Shorelands, and Goal 18: Beaches and Dunes.

Ten years later, federal proposals for ocean oil, gas, and hard mineral leasing during the Reagan Administration prompted the 1987 Legislature to create an Ocean Resources Task Force to prepare an ocean plan with policy and program recommendations. The Task Force compiled an extensive set of policy recommendations in the Oregon Ocean Resources Management Plan completed in 1990.

The 1991 legislature, acting on Task Force recommendations, passed the Oregon Ocean Resources Management Act (ORS 196.405 - 515, presented in pdf Appendix E (42 KB) of the Oregon Territorial Sea Plan), which created the program as it now exists. This law designated the Department of Land Conservation as the lead agency for ocean planning.

And with that, the building blocks of Oregon's Ocean Resource Management Program was put in place.

The 1991, legislature recognized that Oregon's existing federally-approved Coastal Management Program (OCMP) provided a strong policy and legal foundation for ocean management by involving state agencies, local governments, and federal agencies. So, the law references "applicable elements" of the OCMP, such as statutes, programs, and policies of state agencies, local government plans, and statewide planning goals that "relate to the conservation and development of ocean and coastal resources" such as Statewide Planning Goal 19 (pdf), Ocean Resources, which was recently updated by the Land Conservation and Development Commission.

The Ocean Policy Advisory Council (OPAC) was originally created in 1991 to give coordinated policy advice to the Governor, state agencies, and others and to prepare a plan for Oregon's Territorial Sea. Membership and other aspects of the OPAC were changed in 2003 by the Oregon Legislature. OPAC members include voting members appointed by the Governor that represent ocean users, local governments, and other interested parties, as well as seven state agencies, Oregon Sea Grant, and other non-voting members. The Department of Land Conservation and Development provides staff support to the OPAC, which meets quarterly.

The seven state agencies (listed below) represented on the Ocean Policy Advisory Council include almost all agencies with direct authority over management, policy, or programs that affect the marine environment. The State Marine Board, which regulates boating activities, is not represented on the OPAC.

The Ocean Policy Advisory Council has no authority to directly regulate ocean activities or manage resources or to enforce its plans or policies. However, once its plans and policies are approved by the Land Conservation and Development Commission as a part of Oregon's Coastal Management Program, the various state agencies are required to carry them out or act consistently with them.

Learn more about the Ocean Policy Advisory Council by visiting the OPAC page.

The Oregon Ocean Resources Management Plan, also referred to as the Ocean Plan, was prepared by the 1987 Ocean Task Force. It covers a wide variety of existing and potential ocean resource management issues off the Oregon shore in both state and federal ocean areas. It recommends future state policies for most of these issues. The 1991 Legislature recognized that these policies should be the starting point for a specific plan and policies aimed at Oregon's Territorial Sea where the state has jurisdiction.

Oregon has jurisdiction over a three nautical-miles wide strip of ocean water adjacent to the shore that is called the Territorial Sea. Oregon also has a Territorial Sea Plan for this ocean area that applies to state and federal agency programs and activities that take place here. The plan was adopted in 1994 by the Ocean Policy Advisory Council (OPAC) and was approved as part of the state's Coastal Management Plan and was amended in May, 2001. 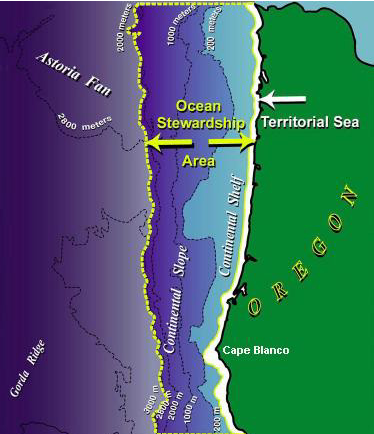 The Land Conservation and Development Commission has the authority under state law to make sure that state agency programs that affect land use (and water use) are coordinated and consistent with requirements of the statewide planning goals and other aspects of the statewide planning program. The 2003 legislature removed specific provisions in ORS 196 that required state agencies to conform their programs and activities to the policies adopted in the Territorial Sea Plan.

In September 2015, the National Oceanic and Atmospheric Administration (NOAA) approved a Geographic Location Description (GLD) within the Oregon Ocean Stewardship Area for federal activities related to marine renewable energy development. A GLD is a geographically specific area where certain federal license or permit activities have reasonably foreseeable effects on a state's coastal uses or resources. Oregon’s GLD extends from the 3 mile boundary of the state’s territorial sea to a boundary delineating the 500-fathom bathymetric depth contour along the outer continental shelf. The process for creating a GLD is prescribed by the federal consistency provisions of the Coastal Zone Management Act (CZMA), and its approval marks the successful culmination of a collaborative effort between state and federal agencies taking several years. Oregon’s GLD is designed to ensure that any marine renewable energy projects within the area are automatically subject to the federal consistency review process, so that federal activities such as the leasing and permitting authorized by the federal Bureau of Ocean Energy Management (BOEM), are consistent with the enforceable policies of a state’s coastal management program.