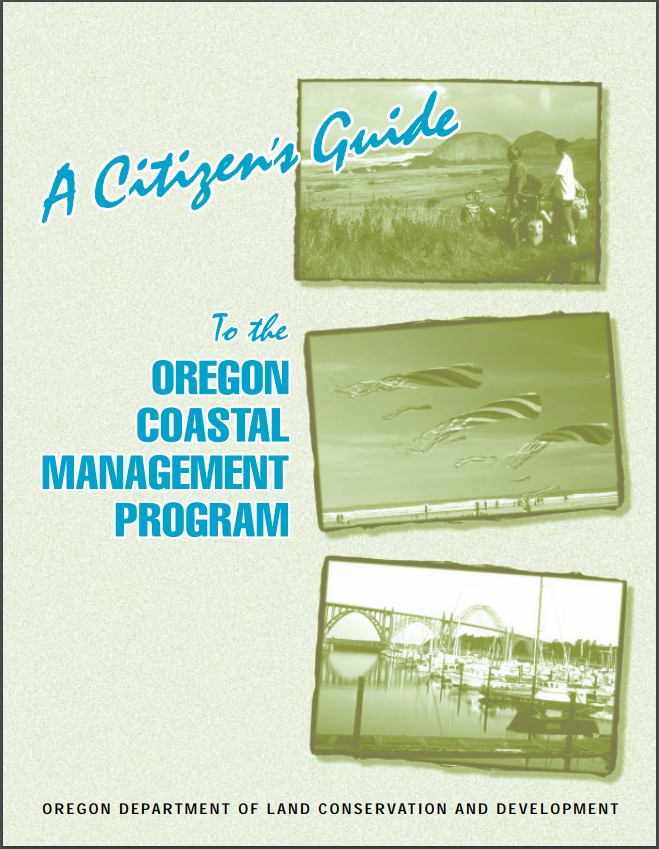 The State of Oregon holds the waters, shoreline, and living resources of its shoreline in trust for the public. The state has therefore established in law a program of planning and management that includes ocean resource goals and policies. The Oregon Coastal Management Program within DLCD seeks to integrate the ocean-management responsibilities of local, state, and federal laws and involve the public to ensure that these resources, values, and benefits are conserved for the current and future generations.

This page provides an explanation of how management of the Oregon Coastal Management Program functions, including the different agencies and their roles in reviewing and approving activities.

For a citizen's guide to the Oregon Coastal Management Program, visit this pdf link (1.99 MB) . (PDF)

Areas of Authority at Sea

Areas of Authority on Shore

Actual jurisdictional boundaries along the ocean shore are complicated because of two factors.

First, jurisdictional boundaries are almost always expressed in terms of the height of the water, or sea level. Sea level can vary with the slope of the shore, the height of the tide, storm events, and, over time, tectonic uplift or subduction of the continent or, sea level rise. So average water levels are reference, but these can change over time. In addition, land-based surveys historically began at a different base level than nautical or sea level surveys.

Second, different state and federal laws have been enacted that refer to different water levels to establish jurisdictional or regulatory boundaries. Different terminology between statutes can also lead to complications.

A large number of state and federal agencies have jurisdiction or regulatory authority in Oregon's Territorial Sea area. Click here for a pdf diagram (87 KB) in pdf format showing the general areas of concern for many of these agencies and programs. A list of acronyms is located in pdf Appendix C (3 KB) of the Oregon Territorial Sea Plan (pdf). For a description of terms used to describe shore boundaries and a diagram that shows the boundaries and terminologies in use along the Oregon Coast, see pdf Appendix D (76 KB) of the Oregon Territorial Sea Plan (pdf). 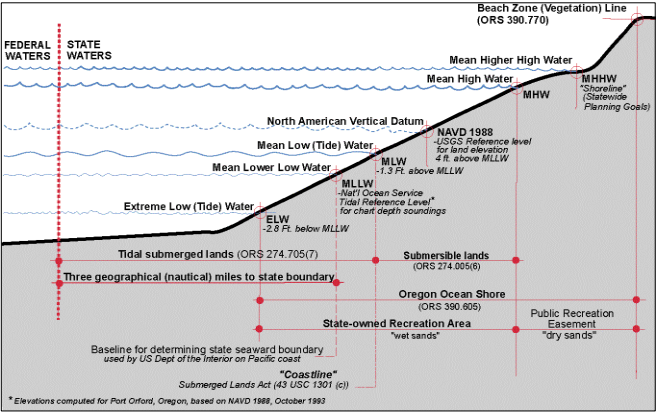 The Territorial Sea Plan (TSP) provides a coordinating vision for state and federal agencies that incorporates all of the above authorities, combined with ecosystem-based management objectives and prescribed management actions for specific areas within Oregon's coastal zone.

The 1991 Oregon Legislature amended ORS chapter 196 to establish the Ocean Policy Advisory Council made up of a variety of ocean stakeholders, local governments, and state agencies, and charged it with providing the Governor and state agencies with policy advice on ocean matters. The legislation gave the Department of Land Conservation and Development (DLCD), which includes the state’s federally-approved coastal management program, primary responsibility for ocean planning and providing assistance to OPAC. One of OPAC’s basic duties was to prepare a Territorial Sea Plan for managing the resources and activities in the state's territorial sea.

The purpose of the TSP is to facilitate intergovernmental coordination and promote common understanding of ecological goals and appropriate uses of ocean and coastal resources. The plan contains a combination of policy intentions (a goal and a set of policies and objectives), supported by scientific background information ocean and coastal areas and resources. The TSP relies on authorities and programs of state and federal agencies to carry out activities in the field.

The U.S. Congress passed the federal Coastal Zone Management Act (CZMA) in 1972 to address competing uses and resource impacts occurring in the nation’s coastal areas. The Act included several incentives to encourage coastal states to develop coastal management programs. One incentive was a legal authority called “federal consistency,” which was granted to coastal states with federally-approved coastal management programs.
The federal consistency provision of the CZMA requires that any federal action occurring in or outside of a state’s coastal zone, which has a reasonably foreseeable effect on land uses, water uses, or natural resources of the coastal zone, must be consistent with enforceable policies contained in the state’s federally-approved coastal management plan. Federal consistency fosters cooperation and coordination between coastal states and the federal government, and assures coastal states a voice in federal decision-making that may affect coastal uses or resources.
At the federal level, the National Oceanic and Atmospheric Administration’s Office for Coastal Management interprets the CZMA and oversees coastal states’ application of federal consistency. At the state level, coastal states apply federal consistency provisions via state coastal management plans.
The Department of Land Conservation and Development (DLCD) is the state's designated coastal management agency. The agency is responsible for reviewing projects for consistency with the federally-approved coastal management plan, the Oregon Coastal Management Program (OCMP). The OCMP is a “networked” coastal program that uses authorities of local governments and several state agencies. DLCD does not exercise direct regulatory authority as it pertains to federal consistency, rather, the networked local governments and state agencies administer the coastal program laws that contain enforceable policies. DLCD’s role in the consistency process is to review statements of consistency to ensure that federal actions comply with the local and state enforceable policies, and to issue the final statement on behalf of the state that the proposed project is consistent with the OCMP.
In order to be consistent with the OCMP, the proposed project must be consistent with enforceable policies contained within three program components: the statewide land use planning goals, applicable acknowledgement of local comprehensive plans and land use regulations, and specific state agency authorities (e.g. those governing the Oregon Territorial Sea Plan, the Removal-Fill Law, water quality standards, and the Oregon Beach Bill).
For more information on Federal Consistency requirements, visit the DLCD website.

What are the “enforceable policies” that would be used in the federal consistency review process?

"The term "enforceable policy" means State policies which are legally binding through constitutional provisions, laws, regulations, land use plans, ordinances, or judicial or administrative decisions, by which a State exerts control over private and public land and water uses and natural resources in the coastal zone." - 16 U.S.C. § 1456a. Coastal Zone Management Fund (Section 308)

In alignment with 15 CFR § 930.53, the State of Oregon is authorized to describe a geographic area in federal waters where certain federal license or permit activities, under 15 CFR Part 930, Subpart D, and Outer Continental Shelf (OCS) authorizations, under 15 CFR Part 930, Subpart E, will be subject to review by the Oregon Coastal Management Program (OCMP) under the Coastal Zone Management Act (CZMA) Federal Consistency Provision. The OCMP is seeking federal consistency review over certain federal actions taking place in the federal waters within a part of the Oregon Ocean Stewardship Area (OSA), as described in Oregon’s Statewide Land Use Planning Goal 19: Ocean Resources. That area is defined as the Geographic Location Description (GLD).
Specifically, the GLD is a polygon starting from the seaward limit of Oregon state jurisdiction at 3 nautical miles (nm) from the shoreline, and extending seaward to a boundary line along the outer continental shelf which defines the location where ocean depth is approximately 500 fathoms (see map below of the Oregon GLD). The OCMP has on file a list of geographic coordinates that form the GLD boundary line, and can make these available on a project by project basis.
For more information on efforts to inventory and manage the Geographic Location Description, visit the GLD page. 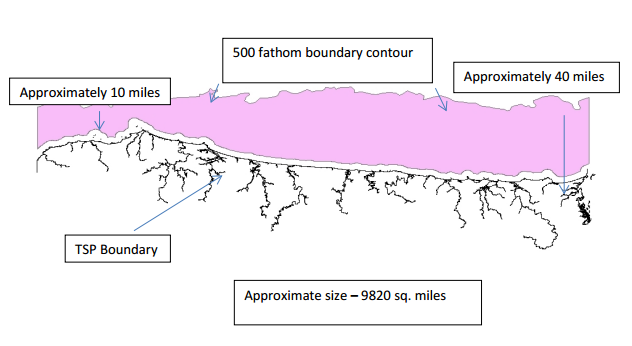 There are four federally-recognized tribes on the Oregon Coast: the Confederated Tribes of the Grande Ronde; the Confederated Tribes of Coos, Lower Umpqua, and Siuslaw; the Coquille Tribe; and the Confederated Tribes of Siletz. These tribal governments encompass many smaller tribes and bands of Native Americans that originally inhabited western Oregon and the coast. Tribal status was terminated by the federal government in 1954 but Congressional action in the late 1970s and early 1980s restored federal tribal status to these and other Oregon tribes.
While the federal restoration acts renewed the tribes' relationship with the federal government and renewed health and education benefits for tribal members, hunting or fishing rights were not restored to the tribes. The restoration acts expressly provided that "no hunting, fishing, or trapping rights of any nature of the tribe or of any member...are granted or restored..." Two of the tribes have negotiated agreements with the State of Oregon related to tribal hunting, fishing, trapping, and gathering rights. In 1980, the Confederated Tribes of Siletz, the state, and the federal government reached an agreement that specifies the terms and conditions under which the tribe and its members may hunt, fish, collect, or gather a variety of fish and wildlife resources including seaweed. Under this agreement, the gathering of sea anemones, rocky oysters, and saltwater mussels is subject to all applicable state law except that upon request of the tribe, the Department of Fish and Wildlife may issue special gathering permits to allow an opportunity for ceremonial and subsistence purposes. In 1986, the Confederated Tribes of Grande Ronde and the state entered into an agreement to permanently define the tribes' hunting, fishing, trapping, and gathering rights.
On May 22, 1996, Governor Kitzhaber signed Executive Order 96-30, officially recognizing state-tribal government-to-government relations. During the 2001 Legislative Session, Senate Bill 770 was enacted (ORS 182.162 to 182.168), codifying key elements of the order. These provisions are the Legislative Assembly’s instructions to state agencies on government-to government communication and cooperation with Oregon tribes. Only designated representatives of an Oregon tribal government can be a part of the government-to-government process in Oregon.

The following table lists the federal laws and regulations that apply to the ocean and coastal zone within Oregon's Territorial Sea.

The State of Oregon holds the waters, shoreline, and living resources of its shoreline in trust for the public. The state has therefore established in law a program of planning and management that includes ocean resource goals and policies. The State has also instituted a number of laws related to ocean and coastal management, listed below.

Management of Oregon’s coastal zone are guided by Statewide Planning Goal 16: Estuarine Resources, Goal 17: Coastal Shorelands, Goal 18: Beaches and Dunes, and Goal 19: Ocean Resources. These goals provide the backbone for any specific management recommendations that may emerge from planning. More information on Oregon’s planning goals may be found at https://www.oregon.gov/lcd/OP/Pages/Goals.aspx.

The oceans cover about 71 percent of the Earth's surface and lap the shores of many nations. A rich and complicated fabric of international laws and agreements has grown over the centuries in response to the use of the oceans for transportation, warfare, food, chemicals, materials, research, and recreation. This web of international laws provides the framework for nations, such as the United States, and their political components, such as states, to manage ocean uses and resources.
The United States is a party to many international agreements related to the oceans, including the 1982 United Nations Convention on the Law of the Sea. Although the United States has yet acceded to the 1982 Convention because of objections to deep-seabed mineral provisions, the U.S. has been a party to all four of the 1958 Geneva Conventions on the Law of the Sea and generally recognizes as customary international law all provisions except for the deep-seabed provisions. States, in carrying out their governance authority for areas of the ocean under their jurisdiction, have a duty to comply with international law as part of U.S. law.
Thus, the Oregon Territorial Sea Plan is a governance instrument for affirmatively addressing these international agreements. The standards for evaluating ocean development proposals, the rocky habitats goals and policies to protect marine biodiversity, and the conservation standards of Statewide Land Use Planning Goal 19 are all provisions that assist the United States to meet these international obligations.